Yesterday the Senate Energy and Natural Resources Committee held a hearing on a bill that would give away public lands in Arizona, lands that are sacred to many Native Americans, to an international mining corporation. The bill in question is the Southeast Arizona Land Exchange and Conservation Act and it's being pushed by Senators McCain and Kyl of Arizona. 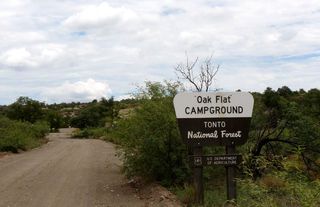 This blatant giveaway has been a priority of the Arizona Senators for years. It would mandate a transfer of 2400 acres of land in the Tonto National Forest to Resolution Copper Mining, a foreign-owned company that plans to turn the land into one of the largest copper mines in the country. This land includes Oak Flat Campground, a place recognized across the country for its premier climbing and birding opportunities. It is also of profound religious, cultural, and historic significance to many Native Nations. In fact, the bill is opposed by the Inter Tribal Council of Arizona, the National Congress on American Indians, and tribes and tribal organizations across the country.

The area's values have been recognized and reaffirmed for decades. In fact, it was first set aside by President Eisenhower who issued a withdrawal from mining for the area in the 1950s. And that withdrawal has withstood the test of time. If passed, this legislation would require the land to be turned over to an international mining conglomerate without environmental review and without going through any of the legally required land transfer procedures.

The Arizona Senators continue to push this irresponsible bill despite local opposition from the community, despite opposition from the many who find the lands sacred, and despite environmental opposition. They have gone so far as to hold up other legislation and Presidential nominations in an attempt to force through their pet project.

Write your Senator and tell them to oppose this bill.

I wanted to thank you for this informative and useful read. I was very encouraged to find this site. Thanks a lot.

Having prominent local leaders describe their experiences with student activism and the power of divestment was an inspiring and grounding experience for those students in attendance. The death of coal is a cause worth fighting for and divestment is a strategy worth implementing. UNC Beyond Coal wants to bring student attention to the importance of UNC’s investment practices, and our efforts are already paying off. The interesting information, the tonic on a note!