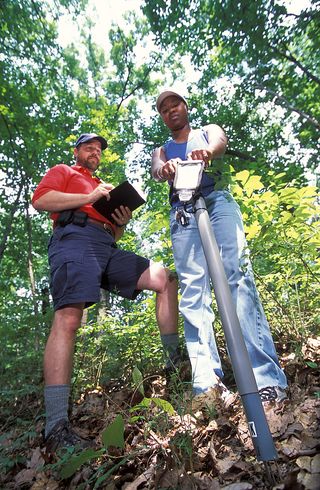 Photo by Stephen Ausmus, courtesy USDA When we turn on the tap, water flows out of it.  When we look at the sky, we will likely see birds in flight.  If we look out our back doors, or drive just a short distance from our urban areas we will find forests, wetlands, meadows and mountains.  As a nation, America is blessed with a staggering amount of natural wealth, so much that its presence can sometimes be easy to take for granted.  Our wealth though is the result of over a century of work by Americans who know that conservation is not just an idea, but a process and a practice.

To support the work of these Americans, the U.S. Forest Service recently awarded over $40 million in grants across the country, supporting collaborative projects to improve forest health. While not perfect, the Collaborative Forest Restoration Program is an important piece of the forest management puzzle. Program funds go to improve habitat by restoring streams, decommissioning roads, repairing culverts, applying prescribed fire and reducing fuels that can feed catastrophic and life threatening wildfires.

One project that will benefit from the Forest Service’s grant-making is the 1.5 million acre Southwestern Crown of the Continent in Western Montana.  Stretching from Roger’s Pass near the town of Lincoln to the confluence of the Blackfoot and Clark Fork Rivers, and from Swan Lake to the Blackfoot River, this area is a crucial link in efforts to maintain ecological integrity in the Rocky Mountains. The goals of the project include:

The project, which is expected to create 179 full and part-time jobs, is shepherded by the Southwestern Crown Collaborative, a group that that includes both non-governmental organizations and federal agencies.  While the project does include some commercial logging, the overall impact on water, wildlife and the economy that depends on them will be positive, moving the ball forward for conservation.
Additional projects in California, Oklahoma, North Carolina, Oregon, Missouri, Arkansas, Mississippi and Washington, were also funded.

Support for these projects is evidence that the Obama Administration recognizes the importance of our public lands to wildlife, to drinking water and to our economy, and that they haven’t forgotten that people are the essential value in the conservation equation.