Big Oil has a shameful history. That's why we will be highlighting some of its most recent disastrous oil spills and raising awareness of the devastation that will occur if the industry is allowed to drill in the Arctic and off our coasts. Join us in the effort to protect our special places from drilling!

The Exxon Valdez, an oil tanker transporting 55 million gallons of Alaskan North Slope crude oil, struck the Bligh Reef in Prince William Sound on March 24th, 1989 just after midnight, rupturing the hull of the ship. In the following days, 11 million gallons leaked out into the beautiful waters of Alaska, and within two months the oil had spread 470 miles to the southwest. Thirteen-hundred miles of Alaska's rocky coastline and beaches were drenched in oil, helped ashore by a fierce storm. The oil slicks spread out to eventually cover 11,000 square miles of the ocean's surface.

Prince William Sound is a remote area. The need for immediate cleanup was not met because of the time it took to assemble cleanup crews and disperse ships to the area to aide in recovery efforts.  Initial hot water treatments to remove the oil proved harmful in that they killed small organisms living on the rocky coastline that aide in the breakdown of oil particles. Following cleanup efforts included manually removing the oil by backhoe and shovel, and applying chemical dispersants and solvents. After several failed attempts, only a small percentage of the oil was removed. Cleanup efforts were abandoned after four years, and a great deal of oil still remains to this day lodged in the rocks and sandy beaches of Alaska's coastline. 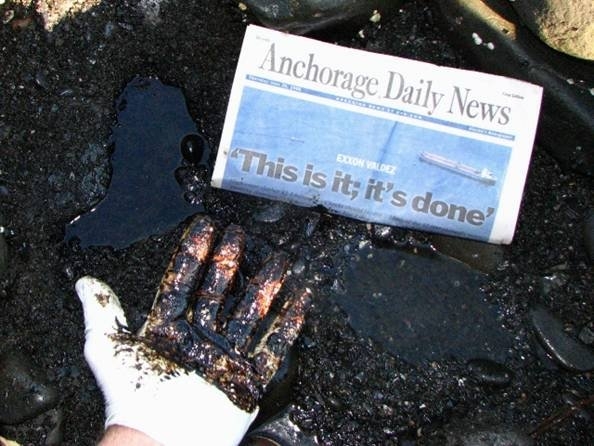 Prince William Sound is a wildlife habitat for hundreds of species of birds, fish, and other animals, which were gravely impacted by the oil spill. Over 250,000 seabirds, 2,800 sea otters, 300 harbor seals, 250 bald eagles, and 22 killer whales died as a consequence. The largest impact  of the spill was found in the salmon and herring populations. Prince William Sound is a key spawning ground for these two fish species, but when the spill drenched the sound in thick oil, the billions of fish eggs were killed, and the species was decimated. To this day the herring population and the local fishing economies that depend on it remain unrecovered.

The fact that 23 years have passed and there is still oil lingering along the beaches and rocky coastline of Alaska is the perfect example of why Big Oil should not be allowed to drill in the Arctic. Yet despite the remoteness of the area and the impossibility of oil spill cleanup Shell Oil is continuing to push forward with plans to drill in the Arctic's Polar Bear Seas as early as this summer.

Join us in telling President Obama to protect America’s Arctic from the dangers of drilling!

Is it true that most or all of the cleanup personal are dead now??

I read in the newspaper last week that the Exxon-Valdez has been sold for scrap.