« Celebrating the Outdoors | Main | After a Spill: Ongoing Spill Costs »

After a Spill: Oil Soaked Animals

This is part three of a five part series on the dirty legacy of offshore drilling. Read parts one and two. 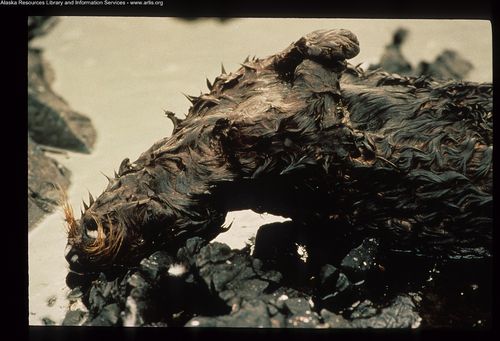 BP has painted spills as fixable, running commercials showing volunteers cleaning oiled birds with Dawn Soap. Although it’s nice to think we can undo the damage done to animal populations, the reality of a spill is much bleaker.

When asked to estimate the number of wildlife damaged by the Exxon Valdez spill, the Exxon Valdez Oil Spill Trustee Council is unable to give an estimate, saying simply “no one knows.” The best estimate for wildlife deaths are as follows: upwards of 250,000 sea birds, 2,800 sea otters, 300 harbor seals, 250 bald eagles, 22 killer whales, and billions of salmon and herring eggs. Many of the species damaged by the initial spill are still reported as recovering by the Exxon Valdez Oil Spill Trustee Council over twenty years later. The above are considered low estimations for the immense amount of deaths caused by the spill. Killer whale researchers monitoring two distinct pods in Prince William Sound before and after the spill have seen the devastating effects of oil on the whale populations. Thirteen out of thirty-five killer whales in the resident pod died after the spill and the population still hasn’t rebounded. Even worse off is the transient pod, the Chugach transients, who due to their status as top predator “accumulate contaminants from everything below them. High levels of PCBs and DDT in their blubber may be causing reproductive problems: The Chugach transients haven't birthed a single surviving calf since 1984.” Twenty five years with no successful offspring is a devastating reality for Alaskan killer whales and extinction is a possibility for a pod that has lived in the area for thousands of years. The extreme disruption caused by the spill continues to affect animal populations as well as local biodiversity and human industry today—despite twenty five years of active monitoring and clean up.

Wildlife suffered egregiously in the wake of the Deepwater Horizon spill, too. An August 2011 study surveyed 31 bottlenose dolphins in the Gulf, all of which were underweight and suffered from diseases of the heart and liver. A 2014 report has found that more than 900 dolphins have been found dead or stranded since April 2010. This number is alarmingly high. For the first half of 2013, reported dolphin strandings were at 6 times the historic annual average, playing up fears that recovery will be painfully slow. Making matters worse for predators such as the dolphin, is the plight of their prey, species like the Bluefin tuna.

Research suggests that the population of West Atlantic Bluefin tuna has declined 82 percent since the 1970s, and that the 2011 population is 75 percent lower than the 2005 population—though this is mostly due to overfishing. A recent study released by NOAA focused on how oil affects reproduction and development of species such as Atlantic Bluefin tuna, Yellowfin tuna and Amberjacks. The study concluded that exposure to oil resulted in heart defects and irregular heartbeat rhythms for larvae of the aforementioned large predatory fish, fish with such defects typically would not survive. A researcher on the project noted that “the tunas and the amberjack exposed to Deepwater Horizon crude oil were impacted in much the same way that herring were deformed by the Alaska North Slope crude oil spilled in Prince William Sound during the Exxon Valdez accident.” As herring in Alaska still have not recovered, the future for the gulf’s predatory fish is not looking bright.

Perhaps hardest hit by the spill is the already precarious population of sea turtles in the Gulf. All five species of sea turtle in the region are endangered or threatened—climate change, ocean acidification, temperature change, and pollution dramatically impact turtle lifecycles. Since the spill, turtle strandings have been at record highs. On average, 240 turtles are stranded annually, while over 1,700 were found between May 2010 and November 2012—like dolphins, it is also true that most stranded turtles are not discovered at all. In addition, about 500 dead sea turtles have been found every year in the spill area since 2011—this rate is double the average rate of strandings. Research suggests that oil dispersants are a critical factor in this alarming phenomenon.

While the effects of the spill are most striking when large creatures are slathered in oil, injured, or stranded ashore, the effects are just as impactful further down the food chain. After both spills many organisms and microorganisms suffered seriously as a direct result of the spill or it’s clean up. Early on in the Exxon Valdez spill cleanup hot water was used to disperse the oil. Unfortunately, this hot water method ended up cooking small organisms that lived on the beaches. Further, a study of coral organisms in the Gulf finds that colonies 12 or more miles from the well exhibit little reaction to the event, but demonstrated distress in some colonies as far away as seven miles. Given the fact that coral grows so slowly—much slower than a human fingernail, for instance—it may well be a very long time before the true effects can be realized. A recent laboratory study, unfortunately, demonstrated that oil and Corexit negatively impact coral survivability.

Species near oil spills suffer temporary and permanent damages as a result of our inability to prevent and properly cleanup spills. Hundreds of thousands of animals have lost their lives in these spills. If we don’t reevaluate our current oil and gas production we stand to lose so many more.