When you hear the word 'bayou' it is hard not to think of the American Gulf Coast. These unique swampy ecosystems have come to define the region, especially in Louisiana. In fact, the word 'bayou' is believed to have originated in Louisiana. Healthy bayous are not only teeming with biodiversity, but can also protect inland areas from tropical storms and hurricanes. These are just a sampling of reasons why protecting coastal wetlands are so crucial.

The Louisiana coast has lost 1,900 square miles of marshes and wetlands over the last 85 years as the Gulf of Mexico continues to encroach further inland. Louisiana's wetlands and the communities that surround them are in trouble, but there is a solution: Restoration.

For the Delta Chapter of the Sierra Club, stopping coastal erosion and degradation has been a major priority. With the help of thousands of active Louisiana Sierrans along with like-minded local organizations, projects have been underway to promote nearby nature by bringing back the wetlands that once were and protecting the wetlands that remain. One area that has been a chief concern for the Delta Chapter is New Orleans' Bayou Bienvenue. While the biological health of this area is highly threatened, the efforts that are taking place there have given residents a new hope.

A formerly thriving freshwater cypress-tupelo swamp, the Bayou Bienvenue Wetland Triangle is now a barren saltwater marsh due to canal construction in the 1960s and subsequent saltwater intrusion. In its former glory, as the only part of the Central Wetlands system adjacent to the Lower Ninth Ward, Bayou Bienvenue was an integral resource for one of New Orleans most economically vulnerable communities. Previously filled with cypress trees, water lilies, fish, alligators, otters, and birds; older residents recall the swamp as a place to fish, hunt, harvest and explore.  Now the area is merely open brackish water, but efforts from several organizations including Sierra Club are working to change that.

“In working after Hurricane Katrina with the community in the Lower Ninth Ward, the community decided that they wanted to recover in a more sustainable way. That included not only repairing their houses to be safer and stronger but also work on restoring natural protections like Bayou Bienvenue” says Darryl Malek-Wiley, who has been an environmental justice organizer with the Sierra Club for 10 years in Louisiana. Restore the Bayou is truly a community project born from community ideas and fueled by community efforts.

The Lower Ninth Ward community is making huge strides towards restoration. Last year, the Coalition to Restore Coastal Louisiana in partnership with the Sierra Club and local volunteers were able to plant over 6,000 wetland plants along the shore of the Bayou. In 2013, Restore the Bayou also unveiled new educational and interactive, museum-quality signage to help visitors and residents alike understand what the Bayou used to be and what community members hope it will one day be again. These amazing efforts are just the tip of the iceberg for what Malek-Wiley and the rest of the Lower Ninth Ward community have planned for the site. Not only are these projects physically changing the landscape of the area, but through them residents have a chance to connect with nearby nature. 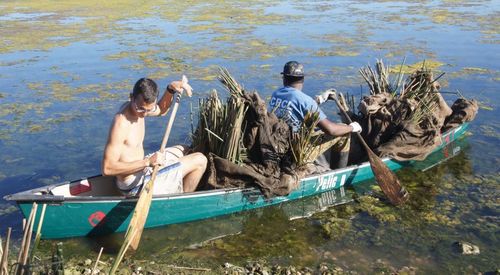 Volunteer transporting marsh plants for planting in the Bayou

As with many local efforts, Malek-Wiley says the major challenge is trying to secure money for the restoration project. In 2012 Sierra Club was able to get Bayou Bienvenue included in Louisiana’s Coastal Master Plan, a state-level plan to reduce flooding risks and rebuild wetlands. Bayou Bienvenue’s inclusion made the Restore the Bayou project eligible for state dollars. Sierra Club also got the Bayou listed on a similar restoration plan developed by the U.S. Army Corps of Engineers. While both of these were steps in the right direction, neither was able to contribute funding to the Restore the Bayou efforts.

Sierra Club is working to engage the Urban Waters Federal Partnership with Restore the Bayou. The Urban Waters Federal Partnership brings together fourteen federal agencies with the goal of improving our nation's waterways and the communities that surround them. The Partnership focuses particularly on communities that are overburdened or economically distressed. At its launch in 2011, the program announced seven pilot sites and three years later the program has grown to include 18 designated Urban Waters locations, one of which is New Orleans. Sierra Club is excited about the growth of this program and hopes to work more closely with the Partnership in the future.

“I think this is the type of program that [Urban Waters] should be investing in because it’s being driven by community leaders, is directly related to the community and would return ecosystem benefits to the community” says Malek-Wiley on why this Bayou Bienvenue should be designated as a Federal Partnership project. The Sierra Club supports the efforts to restore the Bayou Bienvenue Wetlands Triangle and is striving to create a federal and community partnership that will allow this area to once again become an integral part of a more sustainable and healthier New Orleans.

For more on Restore the Bayou Bienvenue Wetlands Triangle, visit their interactive website where you can hear stories, get project updates, and take action as well as donate to Restore the Bayou.